“We survivors do not want our past to be our children’s future.”
~ Roman Kent, Holocaust Survivor

On our last day in Poland, we had the opportunity two places. The first place we traveled to was the town of Oświęcim. You might know the town by the German name, Auschwitz. We discussed the vibrant life that was there before the occupation of the Germans. The population at the time was over 50% Jewish- it's hard to believe that there are currently no Jewish people living in the town today. Unfortunately, the town is now always associated with the concentration camp that was built there. It's important to note that the Polish citizens of the town never asked for the camp nor did they want it there. The people who live there now do not like to talk about the past and they do not like to tell other people where they live.

1. If you were a Jewish survivor of Auschwitz, would you return to your hometown of Oświęcim after the liberation ? Why or why not?


The second part of our day was the culminating event of our trip- the commemoration ceremony of the 70th anniversary of Auschwitz. It was a surreal feeling seeing the notorious gate and watch tower that are often associated with the camp. Over 300 survivors attended the ceremony and it was emotional listening to their stories. 2. Roman Kent, a survivor of Auschwitz, made the statement,“We survivors do not want our past to be our children’s future.” In what ways can your generation take steps to make sure that tragedies in the Holocaust never happen again. List at least 3 ways.

3. The theme of our trip was "The Past is Present." In terms of the Holocaust, what do you think this means? (Min. 3 sentences)

I'm not sitting at the airport in Frankfurt. I'll be home soon!

Posted by Bobbie Downs at 12:11 AM No comments:

"Silence is not an option"
~ Paula Lebovics

Today we spent the day touring Auschwitz I, one of the three major concentration camps at Auschwitz.  While it was originally built to be a work camp for prisoners, it soon became a death camp.

1. I took this picture of the number of people who died at Auschwitz. How do you think the Nazis were able to achieve such a plan? 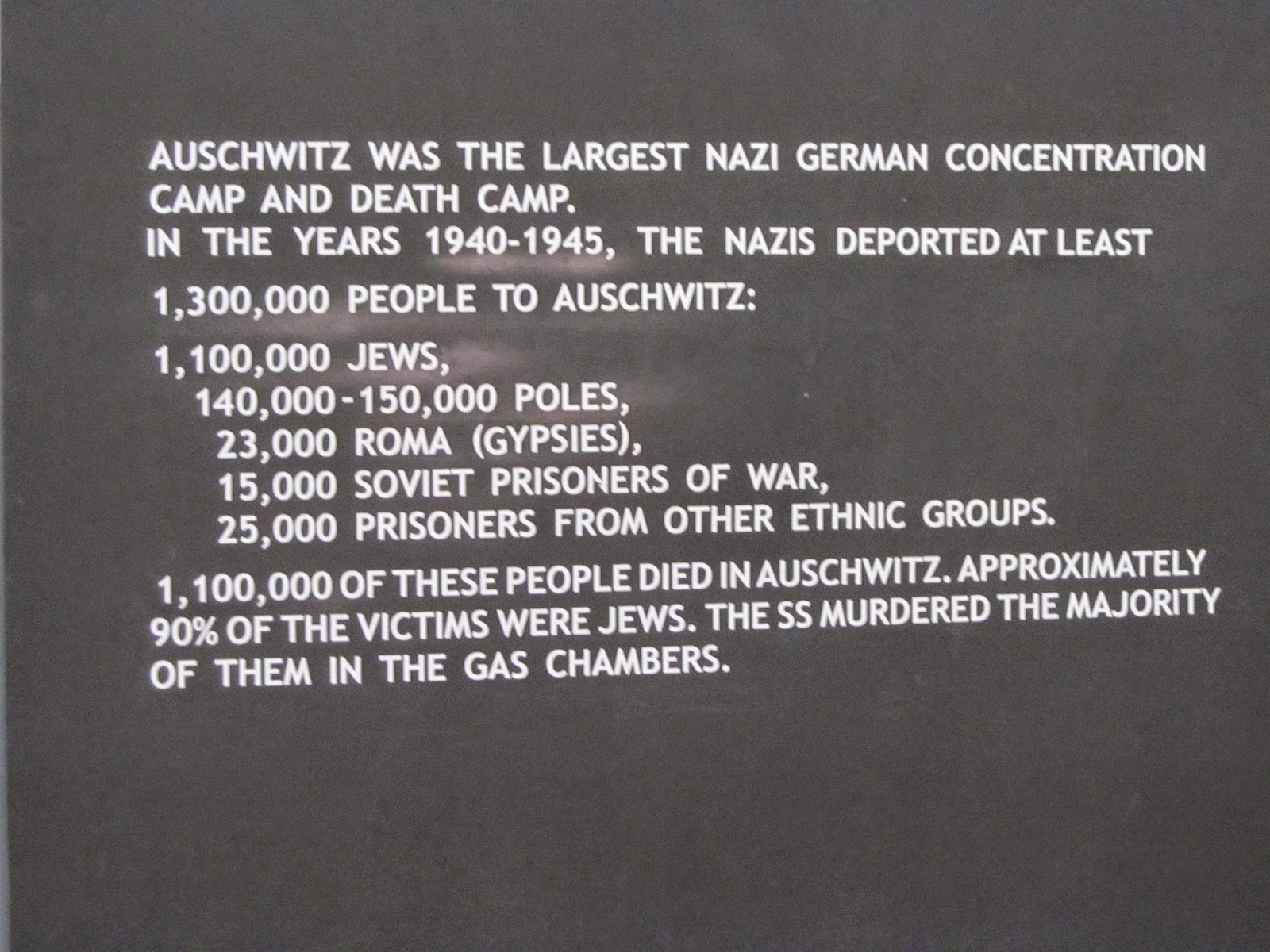 However, while so many people died there, I think that the thing that amazes me most is that people were able to survive and continue on with their lives. As we walked through the camp, several survivors and their family members were touring the camp as well. Talk about strength!

2. If you were a survivor of Auschwitz, would you return to visit the camp? Why or why not? If so, who would you bring with you?

The camp was liberated by the Russian army on January 27th, 1945. I can only imagine the feelings the survivors had when they found out their time of suffering at the camp was over. We have had the opportunity to talk to some of the surviors while we are here, and their stories are so overwhelming. One of the survivors named Paula Lebovics has been with our group the entire time.

3. Go to USC Shoah Foundation Videos. Click on Auschwitz and watch the testimony of Paula Lebovics. In 3-5 sentences, describe her reaction to the liberation. (Remember- she was only 11 years old when they were liberated).

It will take me awhile to truly understand everything that I have learned and saw here. However, I do know that it has changed me. The strength of the people I have met is astounding.

When we first entered Auschwitz, there is a sign that says "Arbeit Macht Frei." In German, this means, "Work will set you free." The Germans used it as part of their deception for when people entered the camp.  Part of me wanted to take down that sign and replace it with something that would celebrate the survivors (on a side note- people did steal the sign from Auschwitz and Dachau- read about it here: Sign Stolen from Concentration Camps). 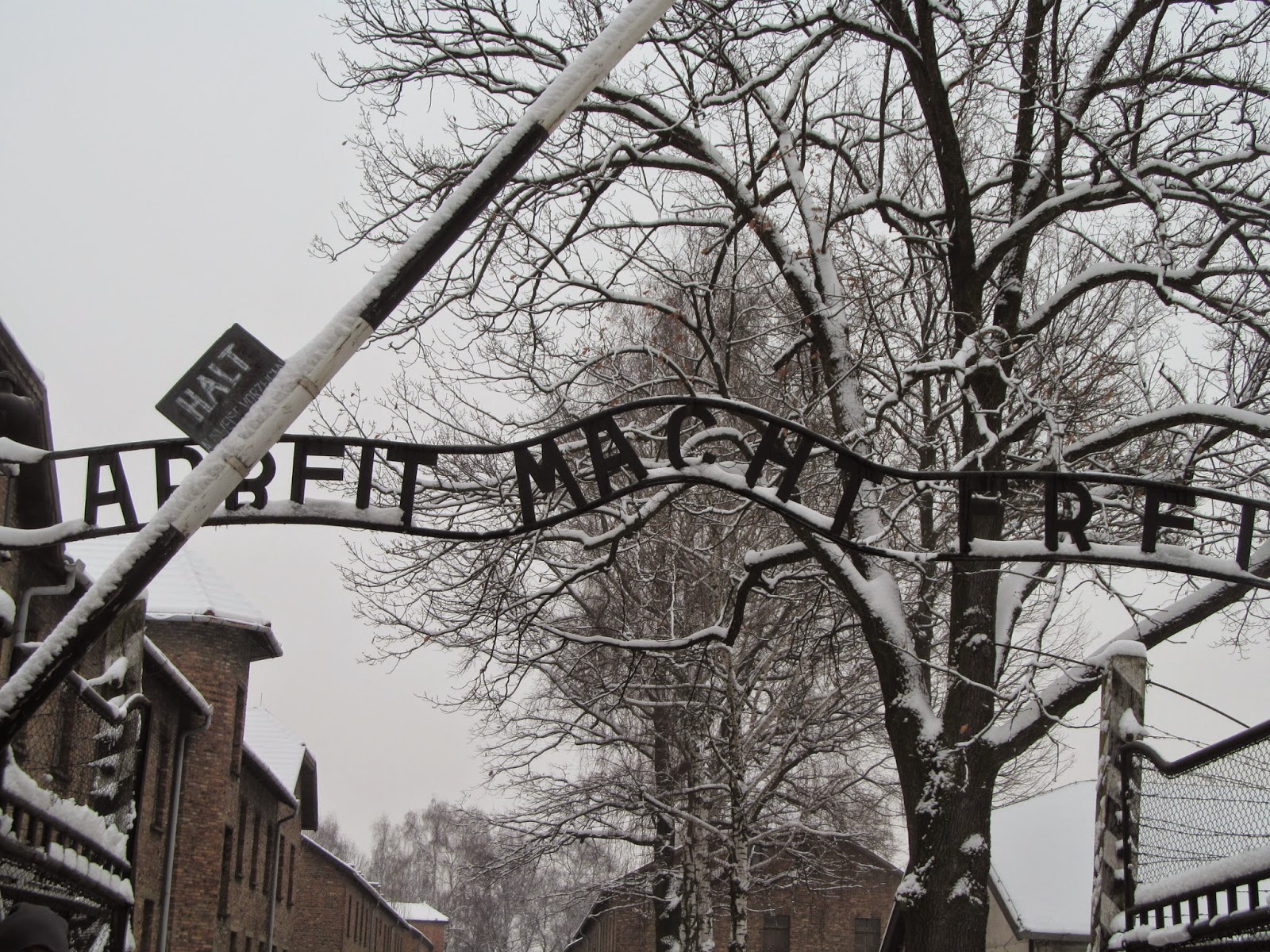 4. If you could create a sign to hang at the front of Auschwitz today, what would it say?

Tomorrow we will attend the commemoration ceremony with the survivors. I will update more then!

Posted by Bobbie Downs at 12:30 PM No comments: 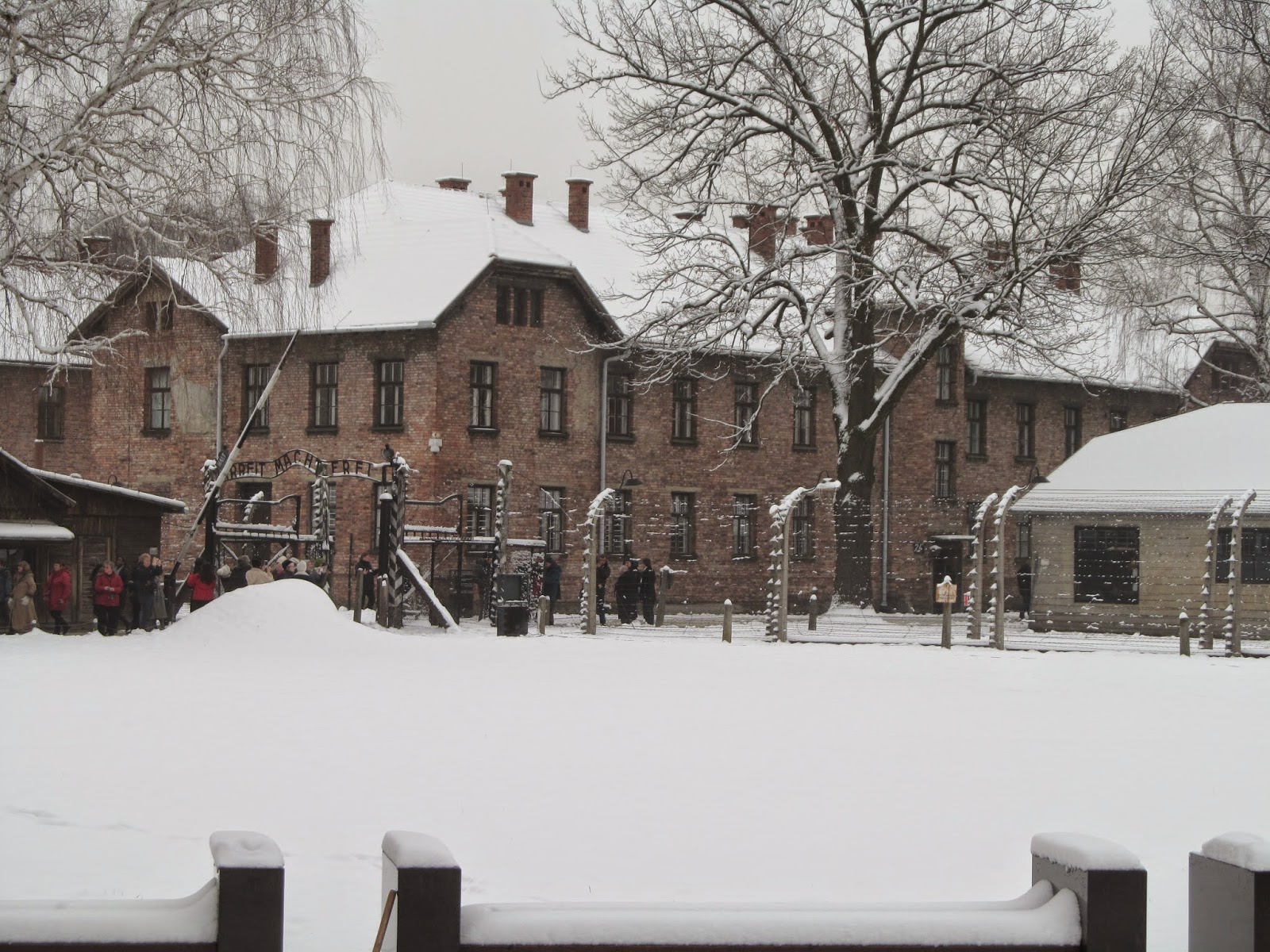 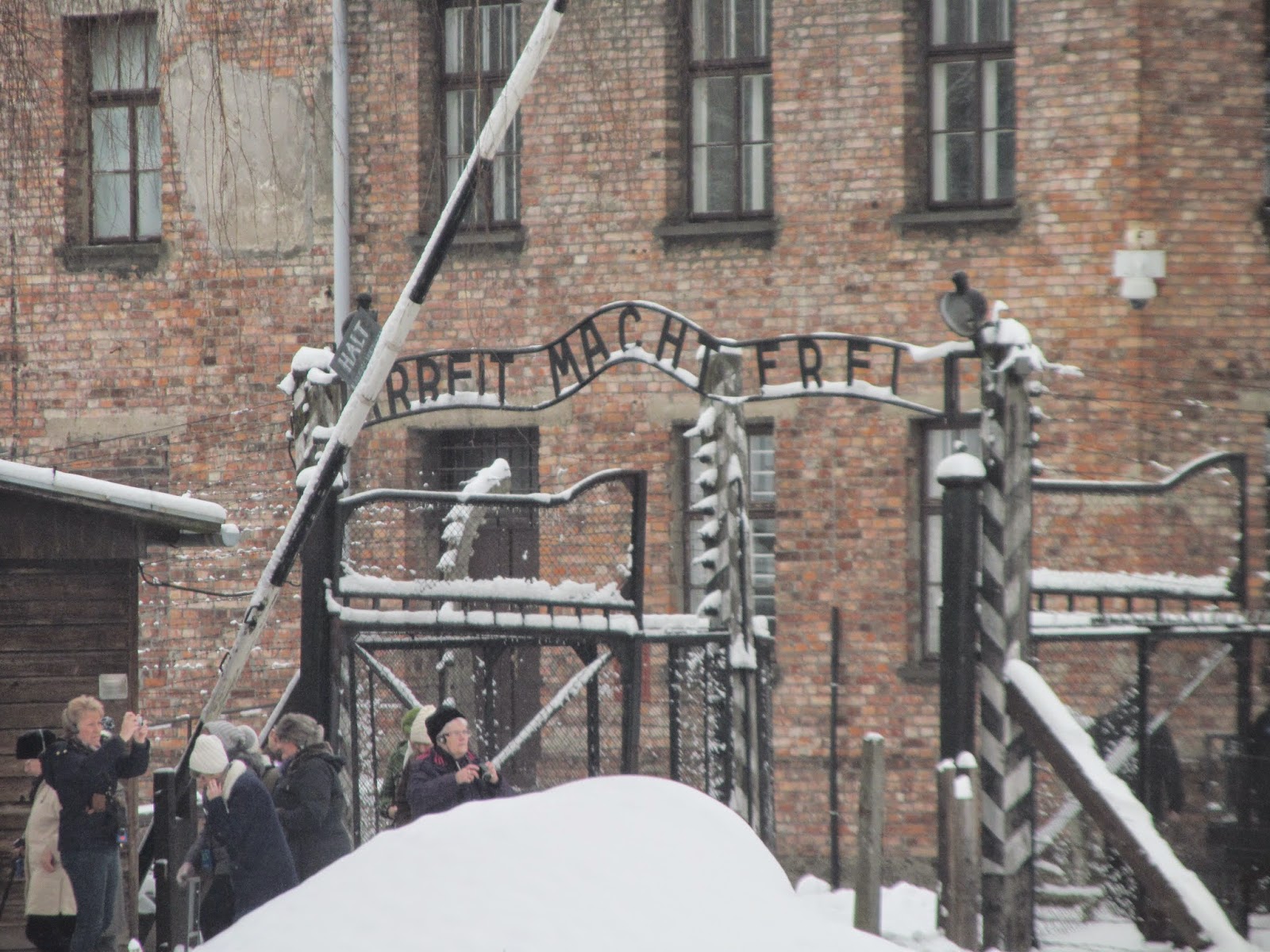 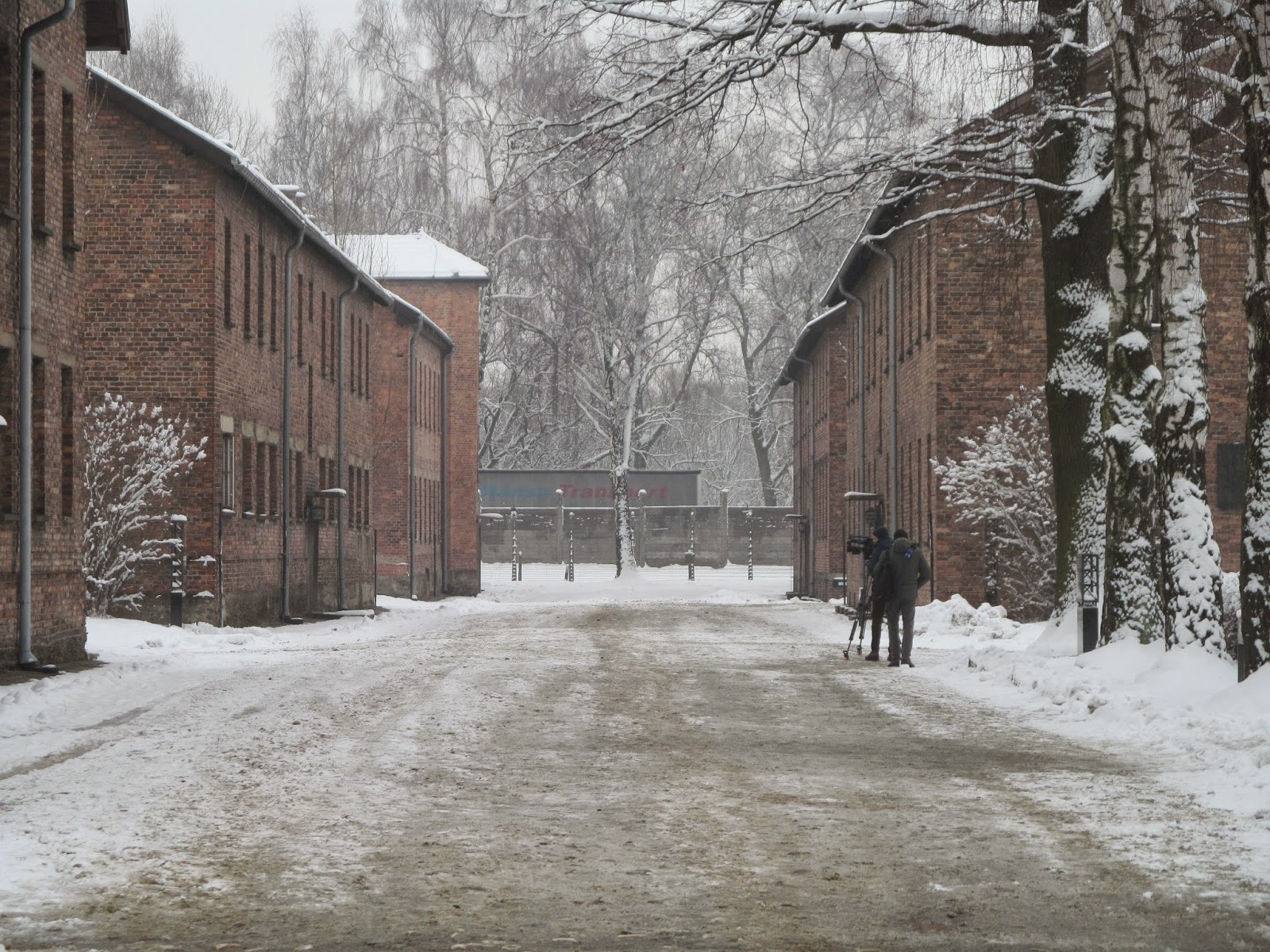 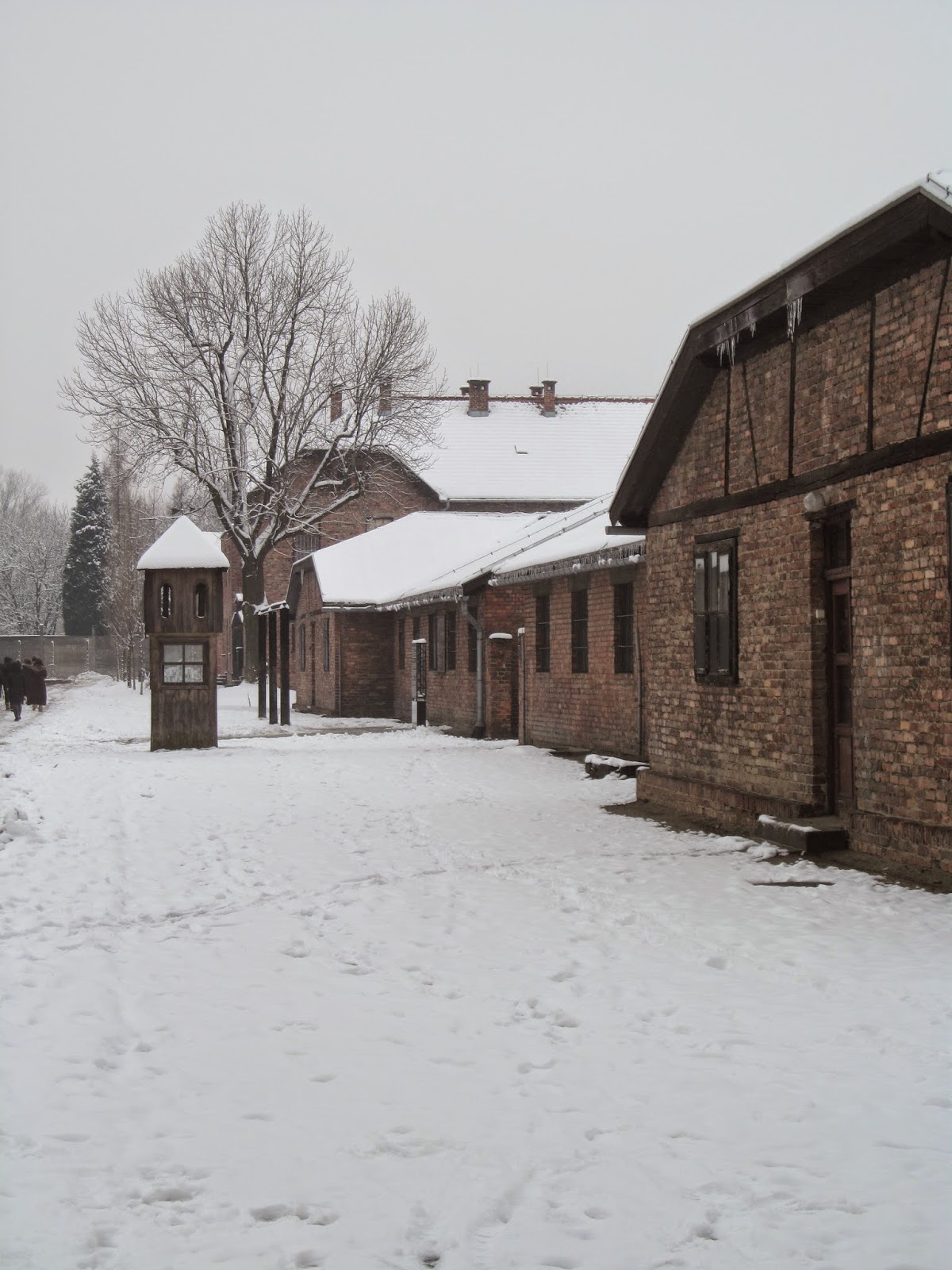 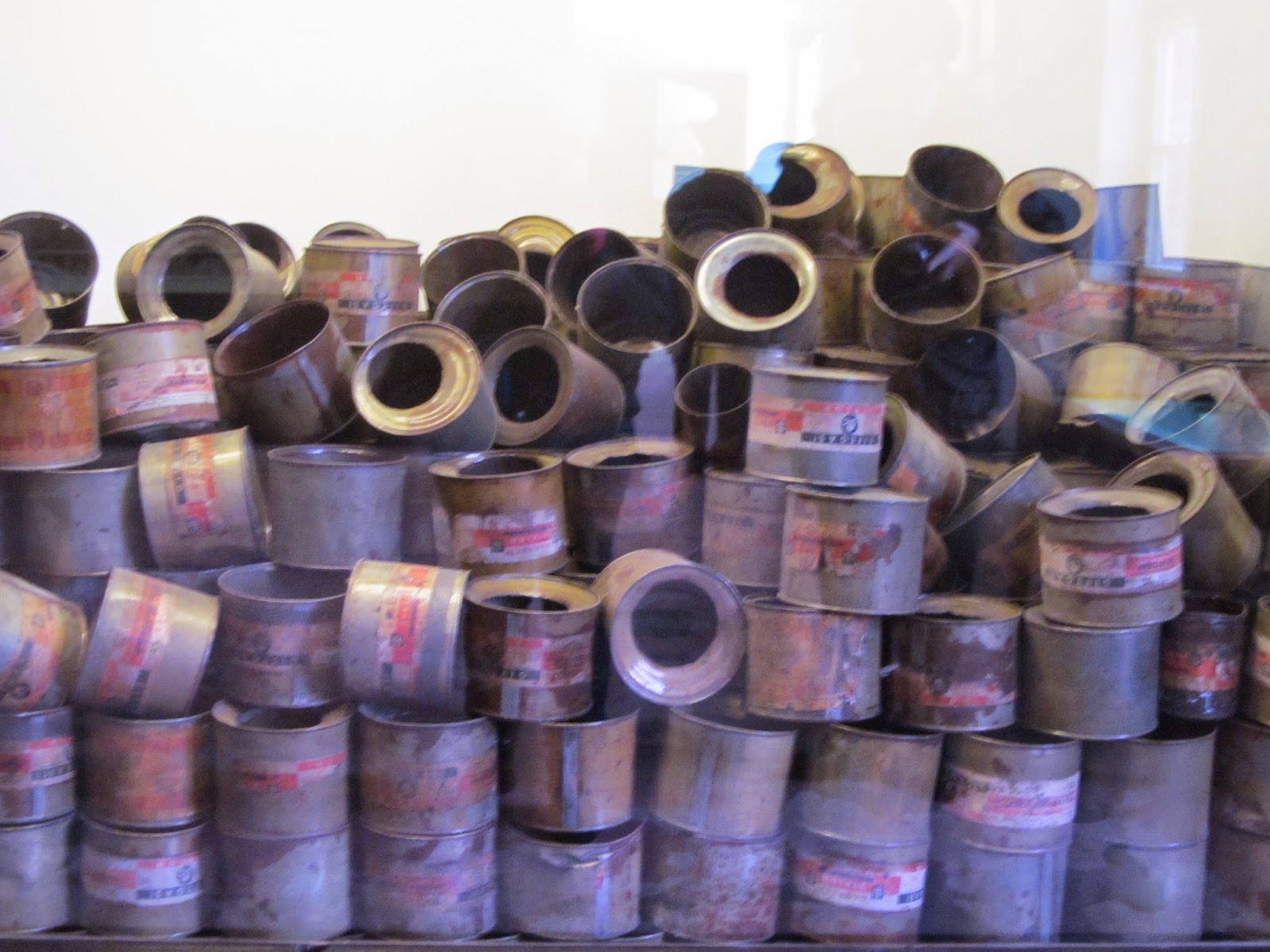 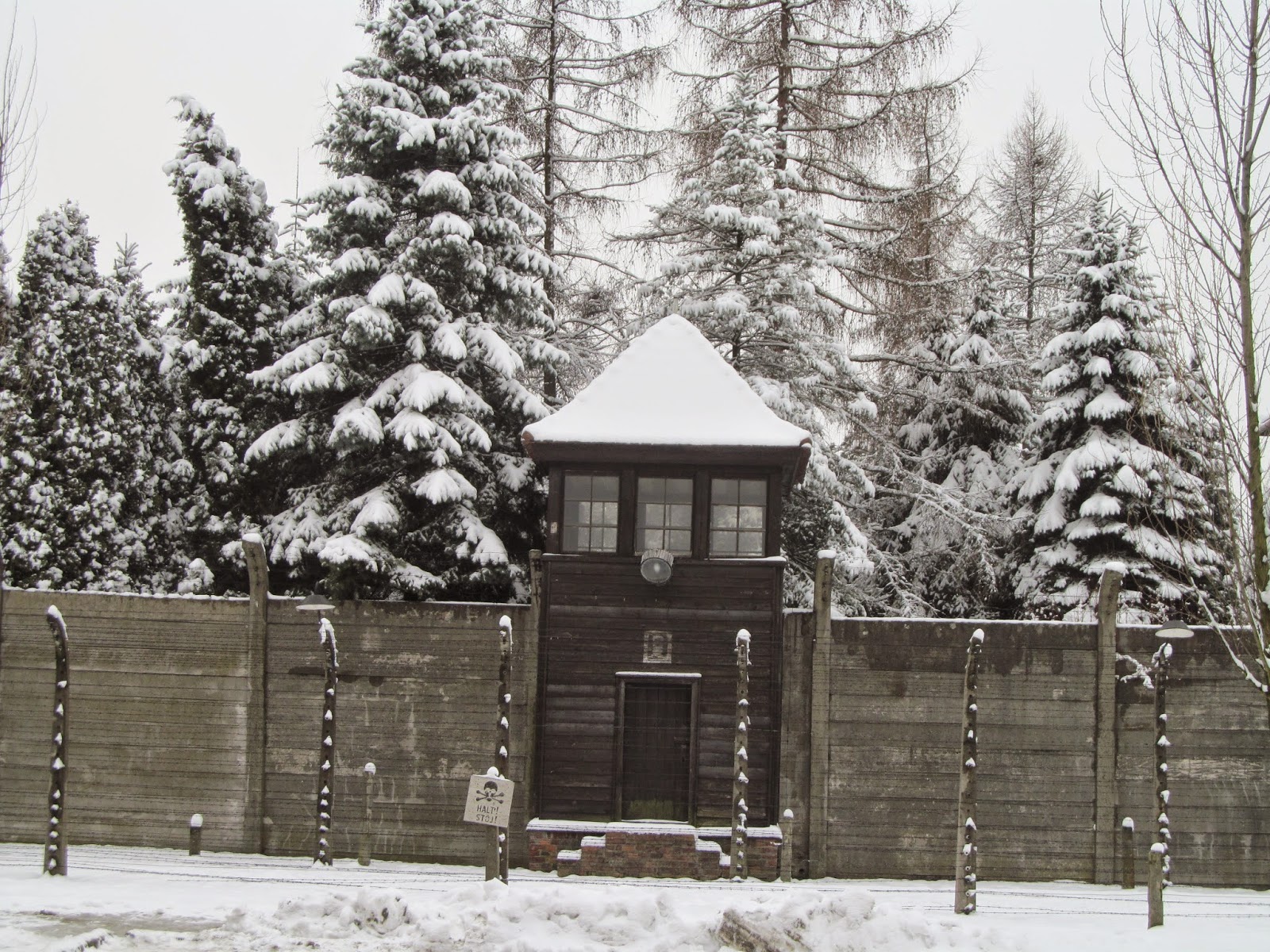 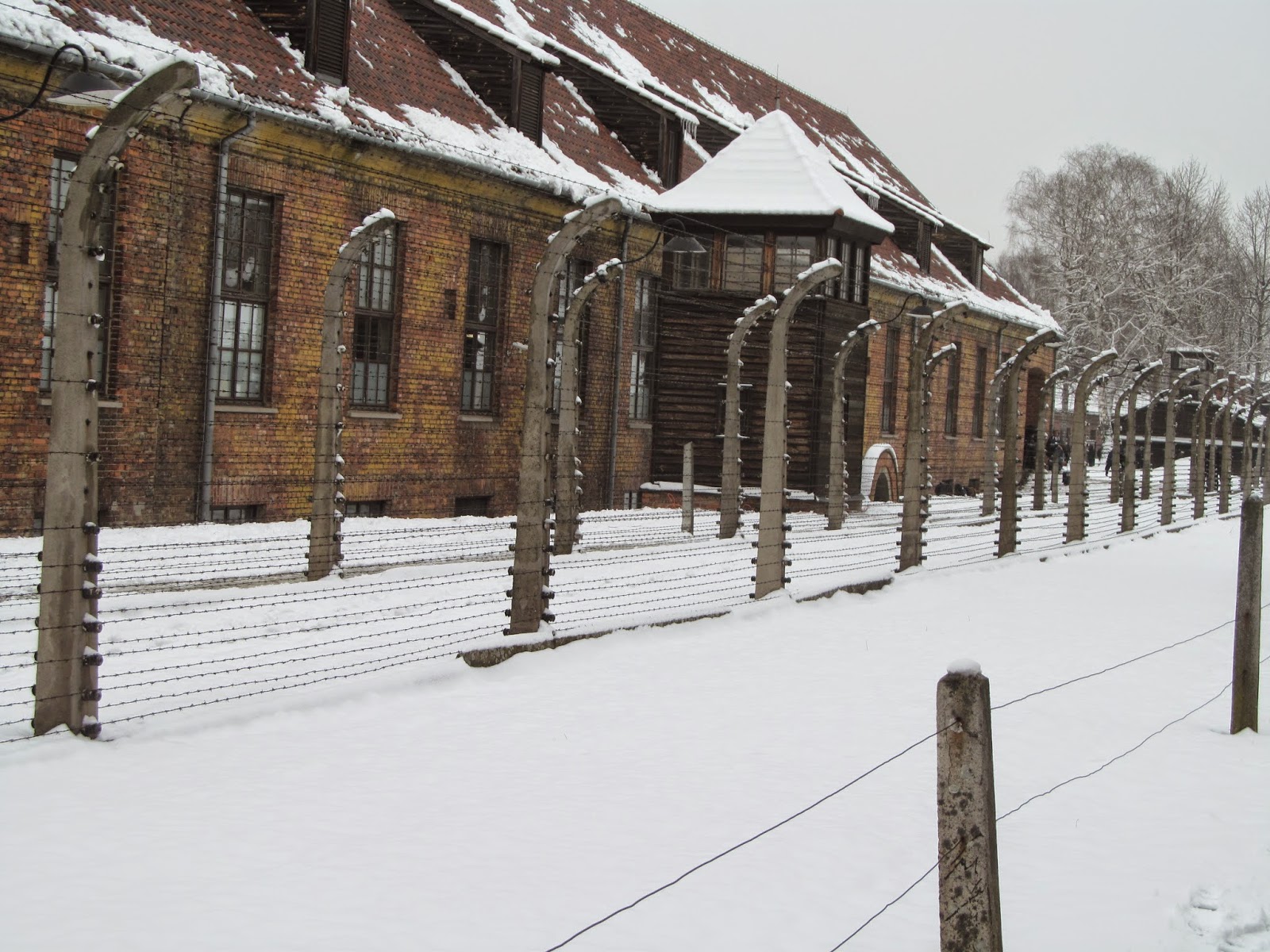 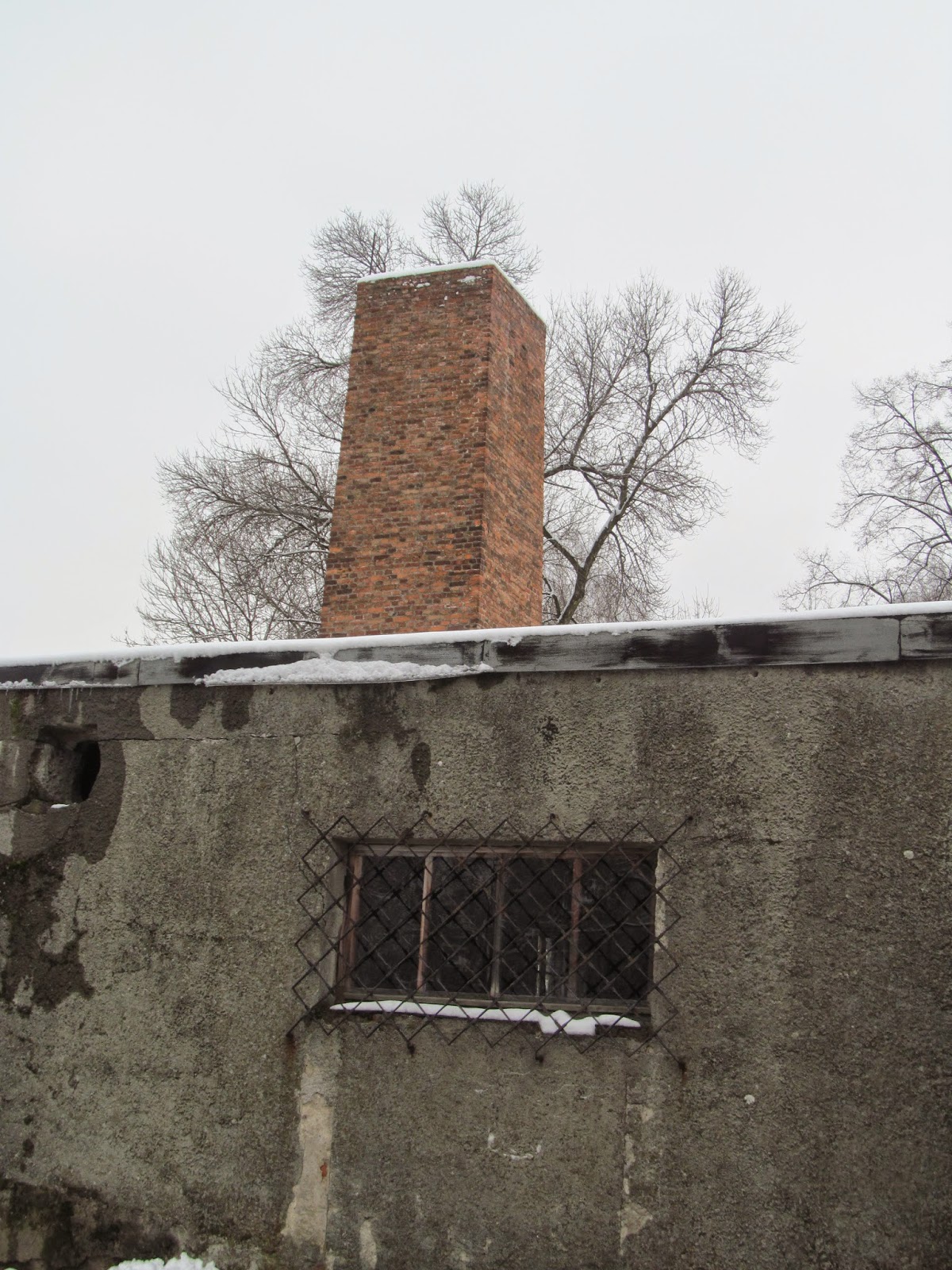 Posted by Bobbie Downs at 11:39 AM No comments:

Here is the link to the tv story they did about my trip:


"After nourishment, shelter and companionship, stories are the thing we need most in the world.”
~ Phillip Pullman 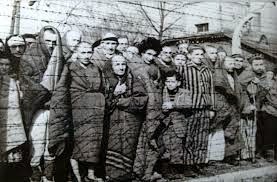 One of the organization's sponsoring my trip is the USC Shoah Foundation. Their mission is to record testimonies of those who have experienced genocide (such as the Holocaust), and then create a way for teachers to use these stories in the classroom.

The organization started when Steven Spielberg (who I met today!) created the movie, Schindler's List. The movie created a need to talk to survivors about their experiences.

The organization is hosting us here for the 70th anniversary of the liberation of the concentration camp, Auschwitz. This took place on January 27th, 1945 when the Russians freed the people who had survived the camp.

1. Go to the USC Shoah Foundation website. Click on "Auschwitz: The Past is Present" and watch the video about Auschwitz. Write down 5 facts.

2. Now go to the section called "Watch." Click on "Watch IWitness Testimonies." You can also click here Watch Testimonies. Click on "Auschwitz" and then find the testimonies below. Choose the testimony of Erna Anolik (she is the third testimony). Watch her testimony. In 3-5 sentences, summarize her experiences.

3. Choose any other testimony in any category. Write down the name of the person, their birthdate, and their home country. Watch their testimony, and, just as you did with Erna's testimony, summarize that person's experience.

We have been learning why testimony is so important. It is one thing to read about a person, but it is another thing to hear their story in their own voice.

4. Why might a testimony be a good way of learning about the past? What does a testimony give us that many other sources can not do?

It's hard to believe that it's the 70th anniversary of Auschwitz. There will be over 100 survivors here and we are going to meet them at a reception tomorrow. Unfortunately, this will be the last time that an event like this might happen (most of the survivors are over 80 years old).

5. How might these testimonies help our generation change or help the future after these survivors are gone?


Posted by Bobbie Downs at 1:57 PM No comments:

There may be times when we are powerless to prevent injustice, but there must never be a time when we fail to protest.
~ Elie Wiesel

Today we spent our entire day in the city of Warsaw. It's hard to imagine that during the war, this entire city was destroyed. Most of the city has been rebuilt, but there are reminders of the devastation throughout the city.

Warsaw was home to a large population of Jewish people during the war. Unfortunately, many of that population was confined to the area called the "Warsaw Ghetto."

2. Go to the following site: US Holocaust Museum- Warsaw Ghetto. Read through the information. Write down 10 facts about the ghetto. Place a * next to the three facts that you find most surprising.

One of the things that I'm quickly learning is that the Jewish people had a strong will to overcome their situation. While the Jews in the ghetto knew that they would not defeat the Germans, they were unwilling to die without dignity. Because of this, they planned an uprising.

3. Go to the following site: US Holocaust Museum- Warsaw Ghetto Uprising. In 3-5 sentences. Summarize the uprising. 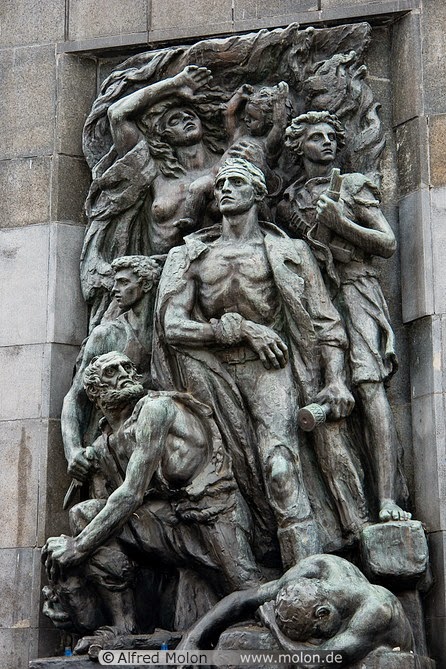 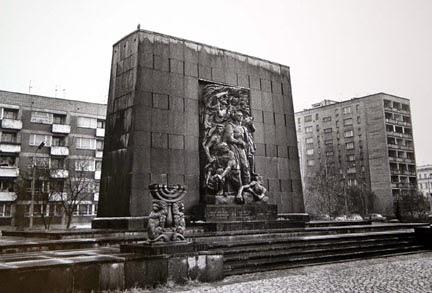 This statue was built to honor those who fought in the Warsaw Ghetto Uprising. It currently stands in front of the newly built Museum of the History of the Polish Jews (our main location today). We spent a part of the day analyzing this statue and what it might mean.

5. Look at this statue. Write down 3 things you notice. What might those things represent?

After the war, most of the city was only rubble. However, before building any of the surrounding buildings, the survivors erected this statue.  It's hard to believe that they were able to build that statue in 1948, only three years after the end of the war.

6. Why do you think they would choose to build a statue before rebuilding the town?

7. If your town was destroyed and you survived, what is the first thing you would rebuild? Why?

(Sorry this got posted a little late- our schedule has been a little crazy!!!!)
Posted by Bobbie Downs at 1:36 PM No comments:

"a journey of a thousand miles begins with a single step..."

I’m really excited (and nervous) about my trip to Poland. Over the next 24 hours, I will be doing a lot of traveling.
During part of my travels I will need to exchange money.
I am a little nervous about traveling because I do not speak the native language of Poland.
I’ll probably be very tired when I arrive in Poland. The reason for that is time difference.
This is truly an honor to be able to go on this trip.  Read the article found at this link:


Posted by Bobbie Downs at 1:02 PM No comments: